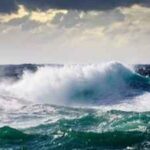 Who Called You Out?

Let me give you a vivid description of what happened in Matthew 14:22-32 — “22 Immediately Jesus made the disciples get into the boat and go on ahead of him to the other side, while he dismissed the crowd. 23 After he had dismissed them, he went up on a mountainside by himself to pray. Later that night, he was there alone, 24 and the boat was already a considerable distance from land, buffeted by the waves because the wind was against it. 25 Shortly before dawn Jesus went out to them, walking on the lake. 26 When the disciples saw him walking on the lake, they were terrified. “It’s a ghost,” they said, and cried out in fear. 27 But Jesus immediately said to them: “Take courage! It is I. Don’t be afraid.” 28 “Lord, if it’s you,” Peter replied, “tell me to come to you on the water.” 29 “Come,” he said. Then Peter got down out of the boat, walked on the water and came toward Jesus. 30 But when he saw the wind, he was afraid and, beginning to sink, cried out, “Lord, save me!” 31 Immediately Jesus reached out his hand and caught him. “You of little faith,” he said, “why did you doubt?” 32 And when they climbed into the boat, the wind died down.” (NIV)

Jesus had just finished ministering to people; just fed the five thousand. He told His disciples to go ahead of Him to the other side of the sea while He sent the multitude home.
So the disciples got into a boat and left while Jesus went to pray. Jesus prayed a while and later decided to go meet His disciples who by that time were already in the middle of the sea battling with waves and contrary winds. Jesus saw them and decided to go to them in the strangest way; He walked on the water!

From a distance the disciples saw someone who was walking towards them on the water and they all shouted, “A ghost! That’s a ghost!. We’re finished!”. I’m very sure some of the disciples were already saying their last prayers because, first they were battling with the boisterous winds and now, a ghost right in THE MIDDLE OF THE SEA?! How exactly will they survive this dilemma? Then Jesus spoke to them and said, “Relaaaxx, it is I. Don’t be afraid”. Peter then said to Him, “Lord if it’s really you, bid me to come” and Jesus said to him, “Come!”

Are there times when God calls you out of your comfort zone? Has He ever told you to do things you felt were so abnormal or in your words ‘uncomfortable’ or ‘weird’? When He tells you to do something in such a way that is totally different from how it is usually done? Yes? All He expects you to do actually is to trust Him and step out of your comfort zone so that He will hold your hand while you do great exploits together.

…and Jesus said to him, “Come!”. At this, Peter believed it was Jesus— His very own Jesus, walking on water. He was getting ready to jump out of the boat when some of the disciples on the boat stopped him and shouted at him. One of them said, “Really?! you really wanna go out? Can’t you see the raging storm?”, another said, “I’m really sure that’s a ghost, don’t do this Peter, stay here. You’re safer here than out there”, but Peter responded, “C’mon guys, relax I’m sure that’s not a ghost. Don’t worry I’ll be just fine” and then Peter put out his left foot and then his right foot; taking one step at a time.

Slowly, he started walking towards Jesus who was at a distance looking and smiling at his wonderful Peter. Peter was shocked, he didn’t believe he was also walking on the water!!!!!
In fact, He was almost jumping for joy, then he continued walking towards Jesus. The other disciples on the boat were also amazed. But all of a sudden, Peter started sinking. Yeah, he got distracted; he stopped looking at Jesus and started looking at the turbulent waves.

30 “But when he saw the wind, he was afraid and, beginning to sink, cried out, “Lord, save me!”. Just when we start to think we got this all under control by ourselves; when we think to ourselves, “well, ‘I’ am doing just fine” and then like Peter, we start looking at the turbulent waves instead of the Author and Finisher of our Faith, we become frightened at the sight of the waves and suddenly we started sinking. In our frightened state, we cry out to the One who told us to come “Jesus, help me!”. And Jesus, our Jesus, our best Friend; He stretches out his hand and helps us out as He helped Peter and says to us, “O you of little faith, why did you doubt?”. Why do you doubt? No matter how uncomfortable stepping out of your comfort zone seems, step out; trust God who has called you out. No matter what others are saying concerning your decision to step out, no matter how high the waves rise when we step out, just trust HIM and walk on the water with Him holding your hands.

And they walked back to the boat together and when they got back, the wind ceased and then the disciples were like, “oh Jesus, you really are the Son of God” (like they didn’t have a strong conviction before… Haha!). Anyway, that’s how the story ended… Pheww, Jesus helped him. What a relief! But like Peter, we often turn our eyes away from Jesus to the waves that are frightening.

It is certain that in stepping out of our comfort zones, there will be waves, turbulent waves; I tell you for a fact. It’ll look like things are not going well, it’ll look like you’ll be swallowed up by some terrible situations, so what do you do? Turn to the situations or just stick to the path you’re walking on following Jesus’ instructions?

In following Jesus, we are not to focus on the troubling and frightening situations that we see around us even in our lives, but we are to focus on Him, fixing our gaze on Him constantly. Come to think of it, who called you out of the boat? Is it Jesus or the waves? So focus your attention on who called you out!

Hebrews 12:1-3 — “Therefore, since we are surrounded by such a great cloud of witnesses, let us throw off everything that hinders and the sin that so easily entangles. And let us run with perseverance the race marked out for us, 2 fixing our eyes on Jesus, the pioneer and perfecter of faith. For the joy set before him he endured the cross, scorning its shame, and sat down at the right hand of the throne of God. 3 Consider him who endured such opposition from sinners, so that you will not grow weary and lose heart.” (NIV)